The current Operating Framework says that every PCT Cluster must offer three community services through Any Qualified Provider. The PCT cluster determines what the services are, and for each one it determines what the "qualified" means. That is, the PCT Cluster produces a specification for the services outlining what the provider is expected to be able to do (and just as importantly, what it is not supposed to do). The AQP services were then advertised and providers where invited to register to provide the service, which involved the PCT Cluster determining of the provider was "qualified". AQP providers can be existing NHS providers (which have a lot to lose) as well as voluntary and private providers (which have a lot to gain).

The Department of Health's website that was set up to privatise the NHS is called Supply2Health (henceforth known as the NHS Privatisation website). This website has the list of currently registered AQP providers. The providers for Adult Hearing include Ealing Hospital NHS Trust. This trust provides acute services for Ealing and community health services for Ealing, Brent and Harrow. The following image is a Google Maps image of the area covered by Ealing Hospital. 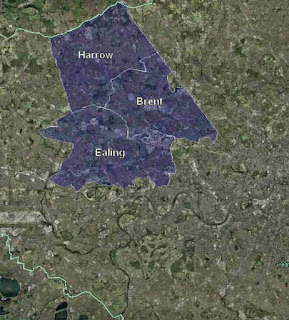 The NHS Privatisation website says that Ealing Hospital will provide Adult Hearing Services as an AQP provider for the following PCTs:

The area covered by the hospital as an AQP provider is shown here: 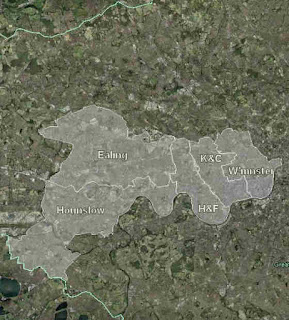 The image shows Ealing in the top left, but it also shows that the trust is providing hearing services for a much larger population to the south, east and west. It may be easier to visualise the greater area covered when the two images are combined: 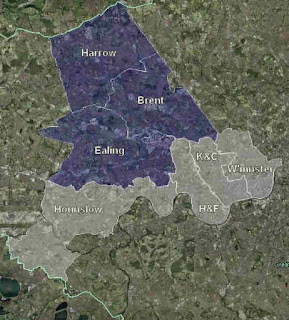 The NHS Privatisation website says that in the area covered by Ealing borough there are three AQP providers of Adult Hearing: Ealing Hospital, West Middlesex University Hospital and InHealth Ltd. Inevitably, Ealing Hospital will lose patients to these competitors, so the only way that the trust can maintain its income is by providing services outside its catchment area, and hence this is why it is an AQP provider from Hounslow in the west to Westminster in the east.

One such "competitor" is West Middlesex University Hospital NHS Trust which covers Hounslow and Richmond-upon-Thames: 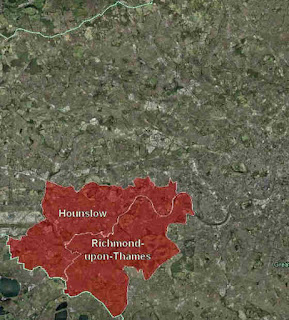 The NHS Privatisation website says that West Middlesex University Hospital will provide Adult Hearing Services in the same areas as Ealing Hospital. The combined image for this trust is shown here: 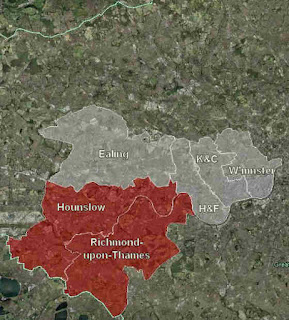 Thus Ealing Hospital is competing for patients in Houslow who would have gone to West Middlesex Hospital, and West Middlesex is competing for patients in Ealing who would have gone to Ealing Hospital. In both areas there are private AQP providers (InHealth and Scrivens) and the "host" trust will lose patients to them. So to make up for patients lost to them, both NHS trusts are providing hearing services in Hammersmith and Fulham, Kensington and Chelsea, and Westminster.