The Hutton review was set up in response to "public concern" (actually, Tory generated witch hunt) to the level of payments of public servants. The Hutton recommendation was that public bodies should publish the ratio between the salary of the highest paid staff member (usually a manager) to the median pay of all staff. Clearly the lower this ratio the more "equal" the organisation is.

While going through CCG annual accounts I have found quite a variation of the pay multiple, mostly because there is a large variation in the median pay (there's not much variation in the highest paid executives). However, some CCGs have made their declarations look like the pay multiple is lower than it actually is. Whether this is a genuine mistake or not, the results are clearly misleading.

As an example, here are the calculations for NHS Fareham and Gosport CCG. The section on pay multiples says this:

When I read this I thought three things. First, £45k is about normal for the median; second, 2.1 is low for the pay multiple; and third, £90k is low for an executive who handles many hundreds of millions of public money. So I decided to do the calculations myself.

The remuneration for their governing board looks like this. 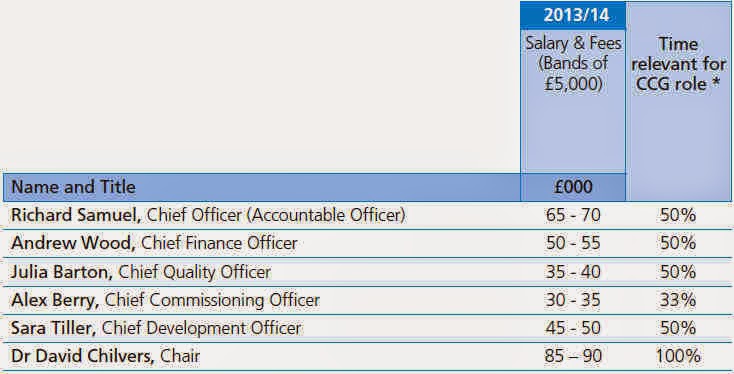 I have edited this table to show only the highest paid staff and to remove the columns that list bonuses (zero), taxable benefits and pensions. The figures are as they appear in the CCG's annual report.

Clearly the "highest paid director" is Dr Chivers, the Chair of the CCG. (A figure of £85k is quite high for the Chair of a CCG, but not unusual.)) But note the right hand column. This lists the amount of time the manager spends working for the CCG. These are not part time jobs because the asterix indicates that these managers work for South Eastern Hampshire CCG or Portsmouth CCG as well as Fareham & Gosport.


"The calculation is based on the full-time equivalent staff of the clinical commissioning group at the reporting period end date on an annualised basis and is subject to audit."

So the salary is an FTE and annualised. Clearly this is so, because it makes no sense to compare a part time job with the median of FTE jobs. However, this is what Fareham & Gosport have done because they have ignored the staff that are shared with other CCGs.

The highest paid executive is actually Richard Samuel, the Accountable Officer; it is usually the case that the Accountable Officer is the highest paid executive. Mr Samuel is paid £65-70k by Fareham & Gosport CCG and another £65-70k by South Eastern Hampshire CCG (say £130-140k, a median of £135k). Using the median pay as £42.5k, the pay multiple should be 3.18, not 2.1. 3.18 is not exceptionally high for a pay multiple (I have seen values of around 7), but it is clearly a more honest figure than 2.1.

For the record, the pay multiple for NHS South Eastern Hampshire CCG is quoted as 3.2, but this has not been calculated from Mr Samuel's salary. This reason for the higher value is because: firstly, the median pay is lower (£35-40k); and, secondly, the other staff are paid much higher than Fareham & Gosport. SE Hampshire have a GP on the board, Dr Andrew Douglas, who is described as a "clinical member" (no, not even the chair) who is paid £120-125k.

The whole point of quoting a "pay multiple" is to try to show that the CCG's salary policy is "fair". But tricks like this make CCGs look like they are deliberately trying to mislead.
at 18:37 0 comments