What the Computer Says 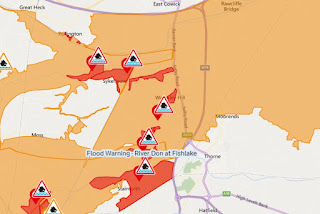 This is not a Luddite attack on computers, in fact it is the opposite. This post is not telling you that computers are bad, but to tell you that they are just tools and that we have to avoid using them badly.

Last week there were floods. So I looked at the Environment Agency website to see if there were floods nearby. There were some 'red' areas and a lot of 'orange' areas. There was no key as to what red and orange meant, but there was a lot of orange areas. The reason is that there are several rivers nearby. Nothing more than nearby rivers and heavy rain. My wife travelled home through one of the red areas and she was not affected by flooding. That evening we had dinner with my son, and we had to drive through one of the red areas to his house in one of the orange areas. No sign of flooding, no sign of people evacuating from an orange area.

And yet there are flooded roads in the area. I was at a meeting on Thursday morning and most of the people were late because traffic was slow through flooded roads and some villages were cut off. My house is nowhere near a water course, but the end of my garden floods to 30 or 40 cm several times a year, and it was flooded last week. My garden is not marked on the Environment Agency as being at risk of flooding.

So what is happening?

It appears that the flood warning maps are based on what a computer has indicated using fairly basic information: the computer says flood! If the river level is higher than normal it is clear there is a danger of flooding and hence the lowest land near to the river is more likely to flood. The Environment Agency has contour maps and an algorithm has simply highlighted the land near the level of a water course. The maps come from satellite imagery and appear to be detailed - the red and orange areas appear to have jagged edges, as if being one side or other of the line is important. However, this is a very broad measure, and will not predict the most of the immediate flooding and will not necessarily give the extent of existing flooding.

The people who were late to the meeting on Thursday drove along the dual carriageway which is above the fields it goes through. The flooding was caused by poor drainage, a blocked culvert, and heavy rain had accumulated on the road. My garden floods partly because it is lower than the gardens of my two immediate neighbours. But also because local planning guidelines are that rainwater from roofs should be channelled into a 'soakaway' rather than the main drains, and as an area of heavy clay with a high water table in the winter, a soakaway turns into a pond that overflows and flows into my garden.

The Environment Agency maps highlight the catastrophic danger of flooding - if the river overflows then these are the areas most likely to be flooded. It does not reflect the blocked culverts on major roads or inadequate planning decisions. These are details you do not expect the Environment Agency to collate. Even so, it is not clear if the maps are accurate unless they also reflect the local flood avoidance actions being taken, including water management schemes like purposely flooding farmland. In other words these these maps appear to be detailed, but the actually lack the most important details.

The reason why I mention this here is because it does highlight an issue of big data. This is a problem that often happens with healthcare commissioning where commissioners focus on the broader trends and pay no attention to the fine details of the data. The problem is that the fine details are actual people, and it is no comfort to a patient to learn that the service is designed for the majority of people if they are the minority that has been masked by commissioners looking at the broad trends.
at 15:18 0 comments