What is in store for us

Paul Mason (@paulmasonnews) has an excellent blog, it is well worth reading. In the latest one he talks about the changes between the last election year, 2005, and now. But more interesting is his description of the future.

Actually, and one of my City bond-analyst contacts said what's really worrying the finance guys is a "chaotic" hung parliament where there's maybe one Green, two Respect and one or two BNP members of the Commons, with strong showing from Plaid and the SNP. Right now the political class is thinking Cleggmania might go away, or recede, leaving the old two-party slugging match to get back into business. Even some Libdems fear this will happen. What they have not even begun to plan for is if Cleggmania begins to give the electorate "permission" to just break away from the whole mainstream party circus. I don't predict this, but you would have to say it becomes more possible.


Read this and then read what Ken Clarke said yesterday about how the IMF will be running the country if there is a hung parliament. Mason's contact does not say that a hung parliament is not the problem, it is one where the usual suspects are not in the prime positions. It is interesting that Plaid and SNP are mentioned as being part of the problem.

Mason's phrase if Cleggmania begins to give the electorate "permission" to just break away from the whole mainstream party circus is interesting because it is already here and it has nothing to do with Clegg. The Social Attitudes Survey earlier this year gave the following graphic: 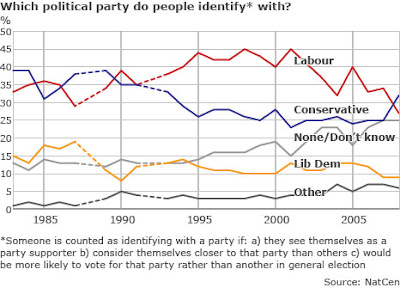 Some people (ahem, Conservative Home) claim that this shows that the country has moved right-wards. This is simply naive and ignorant. There is a small blip in the line for people identifying with the Conservatives over 2008/09. One swallow does not a summer make. It is a blip. The important point is the trends over a longer period. Excluding the blips, since the mid 1990s support for all three major parties have dropped. Yes, there is a bigger fall in Labour than Conservative, but that is to be expected for the party in power. The interesting lines are Others and None, particularly the latter. The fact is that the trends show that the proportion of people identifying with the big two has now fallen to the same level as the proportion of people who have no political identification. People are simply turned off politics.

The next point that Mason makes is more apocalyptic:

When I meet top bankers in private, the words "social unrest" are always on their lips. They fear the electorate, having not been told the full extent of the cuts necessary, will simply reject them once they are unleashed. It is not a question of trade unionism - though the PCS union now looks like the strongest and most militant of all the unions, and has no ties to Labour. What they fear is something more like the fuel protest, with themselves as the target.

We are British, we knuckle under. I saw this at Charles de Gaulle airport just before Christmas. We had a few days, as a family, in Paris and at the airport we found that the plane had been cancelled due to snow. The BA staff just told us that we were on our own and to turn up at 6 the following morning. I knew that the EU regulations meant that BA had the responsibility to provide a hotel room and meals, and I asked the BA staff. They said that all hotels were full and then they left. Did we, a hundred or so tired travellers demand that BA treated us correctly and according to regulations? No, we are British, we just dispersed: some to hotels at the airport, some back to Paris and some opted to sleep on the departure lounge floor (it gets very cold at about 3am).

That is how we are now. We have knuckled under, we are accepting how things are. I think that this is actually a result of the stability of the Brown government that is preventing unrest. What I fear the most about a Cameron government is that it will cause unrest, and I have said this many times on various blogs. My feeling is that Osborne's emergency budget (note the description) will be the second "emergency measure" of Cameron's government. His first action will be to ban public service strikes. Given the effect of the BA and Network Rail strikes on the economy, Cameron may even apply a blanket strike ban.
at 17:04