Will hospitals be local election issues at the next general election?

Paul Corrigan was Tony Blair's special advisor on the NHS and was the architect of the Foundation Trust programme and the Blairite reforms that brought in more private sector involvement into the NHS. He knows a thing or two about the NHS and politics.

It is safe to say that Corrigan is not a fan of Lansley's plans, but he's also not in favour of maintaining the status quo. However, it is interesting to read his opinions and analysis of Lansley's NHS re-organisation.

Corrigan's blog on the government's response to the consultation over the NHS white paper is significant because he's identified the political traps that the new Health Bill will produce. Readers of this blog will know that I am pretty luke warm about GP commissioning, it was going to happen under Labour anyway, and if it is done right (ie not Lansley's way) it could actually improve care. The part of the white paper that no one talks about, and the part that really gets me going, is what Lansley intends to do with hospitals. This is why Corrigan's blog is significant, he explains how Lansley's plan will fail and the significant effect this will have on the Conservatives.


In early 2011the Government will publish how the pipeline of organisations to become FTs will look. It will provide a map of all hospitals that are not FTs and expectations of when they will make it to FT status. It will outline a menu of local and national support for this pipeline. This will not just involve turnaround teams, but will also have plans for regional health economy reconfigurations, as well as options and mergers.

The last part is significant, as Corrigan points out:

The final date for applications to become a stand-alone FT will be 31/03/2013. ... The legislation will remove the status of non NHS FT trusts from the statute book for any trust beyond April 2014. Within these plans the Provider Development Agency will have one year to work with those organisations that have not applied to become an FT to ensure that they have plans for merger or acquisition before the non FT trust status is abolished.

If the coalition survives, the election will be between spring 2014 and 2015. This means that according to these plans about 20 hospitals will be closing or merging or being taken over in the year before the earliest date of the election. I will be interested to see how those in the Government who are interested in electoral politics take to this timetable. Does David Cameron know this?

Hospitals are the most obvious embodiment of the NHS, people get passionate about their local hospital. The re-organisation of the NHS will mean that the ownership of part (or all) of each NHS hospital will be doubtful. But more significantly, there will be twenty places around the country where NHS hospitals will become election issues. We will see the list of these hospitals next year, but the interesting point is that it will not be the Labour strongholds of the North East because that is an all FT region nor North West because that is 80% there. Most likely these failing NHS trusts will be in one of the Strategic Health Authorities of London, South Central or South East Coast. In other words London and the Home Counties. 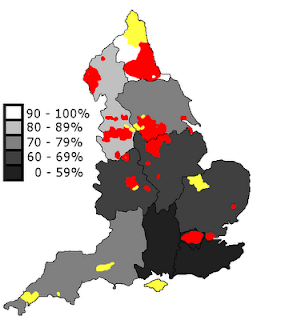 The graphic above shows the Strategic Health Authorities and the percentage of the trusts that are Foundation Trusts (shades of grey). England is almost completely blue politically (Conservative) so the graphic just shows the Labour (red) and Liberal Democrat (yellow) areas. What is immediately clear is that other than London it is the predominately Conservative areas that have a low number of Foundation Trusts.
at 17:47