(...and then he talked some bollocks about the rich living longer because they can buy healthcare, which is not the driver in making the rich live longer, it is better diets and living conditions.)

This didn't seem right, so I did some searches and I came up with the Marmot report (2009). I guess if I had spent some time reading this I could have gone further, but there are 147 pages and I could not see a graph that proved the point one way or the other. In any case, scanning through it I could not see any data going back to Victorian times. Instead I resorted to twitter, asking my followers if they knew whether it was true or not. One reply (from @border_rebel) suggested that I looked at the Black report. The problem was that this was 30 years out of date (published in 1980) and I could not easily find inequality figures.

Another Twitter follower suggested that I asked Gary Wallace (@geerai) so I did. He said initially that it sounded like Cameron was talking nonsense, but said he would get back to me with some statistics. In the meantime I saw a tweet from FactCheck covering this topic.

The figures that are used are mortality of the various social groups. Cathy Newman points out:


"The only comparable figures we can rely on begin in 1921"

and then she concludes:


"If the Prime Minister had claimed that health inequalities were worse than at any time since the 1920s, he’d have been on firm ground. But he stretched it too far. There’s no water-tight evidence to show that 2011 holds a mirror to Victorian times."

Clearly Cameron was over-egging the pudding by mentioning "Victorian times". Gary tweeted back a bit later with a link to a lecture online on health inequalities by Prof Danny Dorling. This screen shot is taken from that presentation: 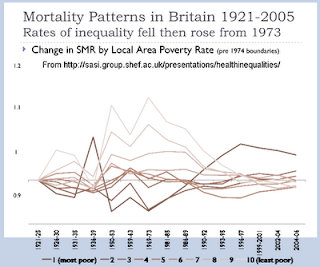 The graph shows the change in mortality rates over the period 1921 to 2005. The ten lines are for various social-economic groups where the darker the line is, the poorer the people are. What is interesting about these figures is that initially the poor improve much more than the rich up until the 60s when the rich started to improve more than the poor. However, it is important to point out it is not that the poor are no longer improving - they do - it is that the rich are improving faster.Since the rich are improving faster than the poor the difference - the inequality - gets larger.

I have heard this mentioned before, and heard someone retort sarcastically when Cameron says he wants to reduce the inequality "how? by making the rich live less long?".

The poor are improving (life expectancy getting longer) but not as fast as the rich. Assuming that policy does not stop the poor improving it will mean that at some point in time they will catch up with the rich. They must! There is a limit to the the life expectancy of the rich, and as the rich approach this limit the change will plateaux. At this time the poor will continue to improve and so the inequality will decrease largely without doing anything. (OK Prof Dorling cautions against this approach, saying that government policy must still target decreasing health inequalities.)

But there is an important issue: the poor are more likely to smoke than the rich and the single-most important health decision you can make is to give up smoking. Labour passed the most important legislation to achieve this: the ban on smoking in public places. This has led to large numbers of people giving up smoking, but the effects on mortality will take some years years to work through.

I wonder if Cameron's speech writers are thinking about these bits of information? Perhaps they know that the combination of, at some point in the future, the rich improvement in mortality will be at a lesser rate than the poor, combined with the benefits of the smoking legislation giving an improvement in mortality of the poor, will mean that in a few years time Cameron will be able to point at the health inequality figures and say "I did that!" when really it would have happened anyway.
at 22:29