Here's some figures, it's fun to compare and to try to interpret them.

First up, the British Attitudes Survey. Every year they publish results of a survey question asking what party the respondent most identifies with. Here are the results from the 2010 survey showing how the value has changed over the last 25 years: 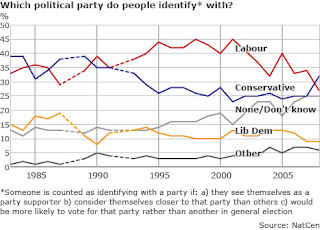 
These suggest that the country is quite Conservative, about a third of people "identify with" the Tories. The interesting figure is "None", that is, the people who do not want to vote and are not interested. Look at how this figure has grown since about 1994: over the last two decades people have got more turned off from politics. If I was running a political party it would be these people I would target.

Now have a look at the results from the 2010 General Election:


In terms of the number of MPs, Other and Liberal Democrats are similar to the BAS scores, but look at the value for the Tories and Labour. Since we do not have a "none-of-the-above" option on ballot papers it looks like the people who have no affiliation have given equal weights to Tories and Labour (bumping the Tory 32% "identity" to a value of 47% of MPs). Of course, individuals vote rather than select MPs, and the share of the vote shows the Tories at the BAS level and Labour, and in particular, Lib Dems, getting a boost from the lack of a "none-of-the-above" option.

I know that the number of MPs reflects the oddities of the first-past-the-post voting system, but even so-called "proportional" systems produce odd results. The election before the 2010 General Election was the 2009 Euro-elections. The results were:


The Euro-elections are based on the d'Hondt party list system where there are 11 regions (plus Northern Ireland) and each region returns between 4 and 10 MEPs with each party getting a proportion of MEPs according to the proportion of the popular vote the party gets in the region (Northern Ireland is an exception because it uses STV). The results above are for mainland UK (excluding NI). The Tory percentage of MEPs is 5% more than the BAS value and the Labour number of MEPs is 7% less than BAS. The LD number of MEPs is 7% more than BAS.

The large "Other" value is due to UKIP and BNP votes which are significant in Euro-elections, but not in other elections.

Now look at the political affiliations in the House of Lords, here compared with the BAS score:


The House of Lords is unusual in that it has a "none-of-the-above" component that call themselves crossbenchers (I have listed these in the None row). It is interesting that within a few %age points the three main parties have Lords equivalent to their BAS score. But significantly, the Other and None figures are similar to the BAS scores.

Does this mean that the House of Lords is more representative of the population than elected bodies?
at 22:01