There is something a bit odd about the shock news released today that people who have a serious (but controllable) medical condition are not expected to live as long as people without it. As per usual, the BBC are reporting the news as if no one has ever been aware of it, but I came to the conclusion a year ago that the BBC have an agenda to broadcast as many articles as possible that puts the NHS in a poor light. (Not surprising really, since that is the agenda of the Department of Health and the BBC seems to be the biggest consumer of churnalism at the moment.)

Let's look at what the BBC are saying.

"Up to 24,000 deaths from diabetes could be avoided in England each year, if patients and doctors better managed the condition, a report concludes."

Let's look at the statistics. Diabetes UK say that there are 2.9 million people with diabetes (type 1 and type 2) or 4.45% of the UK population. They also say that 90% of diabetics have type 2 diabetes.

ONS says that in 2010 there were 493,000 deaths in the UK. Out of a population of 62 million that means slightly under 0.8% of the population. ONS provides detailed tables giving the cause of death. 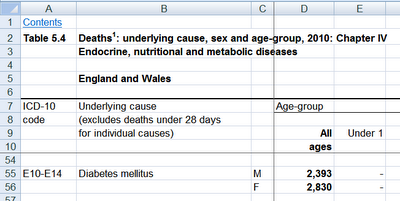 The figures says that in 2010, 5,223 people died from diabetes. When just over five thousand people die from diabetes a year, the BBC says that almost five times more deaths can be avoided. How? Perhaps this statement from the BBC article explains why:

This is not the number of people who die from diabetes, this is the number of diabetics who die. Such people could be dying of cancer, stroke or heart attacks; in other words the same things that everyone else dies of. Diabetes may well exasperate these conditions, but that is not the same as dying from diabetes; ONS says so.

The figures that I gave above from Diabetes UK about diabetes mortality are also in a PDF report on their website called Diabetes in the UK 2010: Key statistics on diabetes. In a section called Life expectancy and mortality it has these statistics:

Note the date: 2010. In fact, the figures for the reduction in life expectancy comes from a Department of Health report dated 2001. The 11.6% figure comes from a report in 2008. In other words, none of this is new.

Then the BBC report this:

The Department of Health in England said shocking variations in care and an unacceptable death toll were evident.

Where did they get this impression from? Variation in the treatment of diabetes can be obtained from the Quality Outcomes Framework, that the Department of Health have been collecting since 2004.

Eh? They have known since 2004 that there were shocking variations and have done nothing about it? Are the Department of Health that incompetent?

The BBC report is churnalism of the press release on the NHS Information Centre. The news is not shocking, it is well known, the NHS IC merely have produced a report about something we all knew anyway. Perhaps the most interesting part of the NHS IC report is this:

This re-states something that was in the Diabetes Audit (pdf) from last year:

Q1 is the least deprived quintile of the population, Q5 is the most deprived. There is a clear message here: deprivation causes type 2 diabetes. The BBC didn't report that, did they?
at 11:50