Could this be the explanation?

Circle Health have been on a public relations offensive in the last few weeks, and this culminated in the appearance on the 1st August of their Chief Executive, Ali Parsa, on both Radio 4's Today programme, but also on BBC2's Newsnight.

On both programmes Parsa gave the same message, much of it plain wrong. He said that Hinchingbrooke will "have balanced books this year" when the first quarter's results showed that they made a £2.3m loss which was £652k more than they had planned. He then said that Germany spends the same as the UK on healthcare, and this is largely on private providers like his company, yet Parsa claimed that the German providers had greater patient satisfaction than the NHS. His claim was unsubstantiated and does not fit in with the facts: Germany spends much more (12% of a much larger GDP than our 10% of GDP) than the UK on healthcare and Germany report access to healthcare issues almost as worse as the US (and five times worse than the UK) and the Commonwealth Fund ranked Germany two places below the UK in patient satisfaction. Parsa topped-off his tirade with the Conservative accusation that GPs are private providers (which they are not for many reasons). The BBC (in the form of Justin Webb of Today and Kirsty Wark of Newsnight), left the worst claims of Parsa to go unchallenged, through ignorance rather than bias.

So why isn't Ali Parsa taking a long August vacation, why is he in the media at a time when most people are watching the Olympics? The reason may well be the following graph: the share price of Circle Holdings over the last 12 months (screen shot from Interactive Investor): 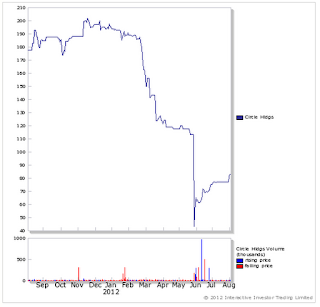 Over the last year the share price of Circle Holdings has fallen from around 200p a year ago (at the time of a large share offering and the listing of CIRC on the AIM stock market) to a value of about 80p now (it even fell as low as 44p for a few days).

This is not the graph of a company with a bright future: investors are showing their lack of confidence in the company. Mix into this the results from 2011 where Circle Holdings made a loss of £13.6m (EBITDA) and the announcement from the government that they will no longer pay Independent Sector Treatment Centres (ISTCs, like Circle's treatment centre in Nottingham, the only part of their business to make a profit) above the NHS rate (and hence this is a cut in payment of about 20%), and you have a company that should be panicking.

On the first of August Parsa was in firefighting mode. His media appearances were to reassure investors, to try and get the share price out of the slump it has been in for two months. The following graph shows the effect of Parsa's efforts: 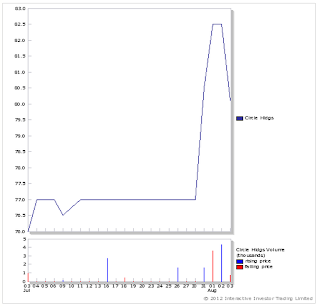 Parsa clearly has a lot more work to do to get the share price back up to its high of 200p, so expect a lot more media appearances in the next few months.

UPDATE:
In a piece on Open Democracy Richard Whittell of Corporate Watch says:


"Earlier this week [31 May] Circle Health went to investors to raise money, partly to help pay off £14 million it had borrowed from hedge fund James Caird Asset Management, at a staggering interest rate of 25 per cent."

Could this be the reason for the sharp drop in Circle share price at the beginning of June?

UPDATE2:
Further searches came up with the following from Reuters confirming Whittell's statement:


Circle Holdings PLC Announces Cash Placing And Subscription To Raise GBP47.5 Million
Tuesday, 29 May 2012 02:04am EDT
Circle Holdings PLC announced that it intends to raise GBP46 million (net of expenses) by way of a placing of 65,714,286 Placing Shares and a subscription of 2,142,857 Subscription Shares at a price of 70 pence per New Ordinary Share with institutional investors. The Placing and the Subscription are conditional, inter alia, upon Shareholder consent. The Company has received Irrevocable Undertakings to vote in favour of the Resolutions from Shareholders representing in excess of 75% of the Existing Issued Share Capital. The Group intends to use the proceeds of the Placing and the Subscription as follows; repay in full the outstanding GBP14.1 million loan from JCAM which will mature in February 2013 and is subject to interest at the rate of 25% per annum; meet its current working capital requirements at CircleBath and Hinchingbrooke; complete the commissioning of CircleReading and its subsequent operating cash flow requirements; continue to support the Group's central operations; and provide working capital to implement the Group's strategy of bidding to take over the management of further NHS Trusts as and when they are put out to tender. Application will be made to the London Stock Exchange for the New Ordinary Shares to be admitted to trading on AIM. It is expected that Admission will become effective on June 19, 2012, and that dealings in the New Ordinary Shares will commence at 8.00 a.m. on June 19, 2012.