The Coalition’s White Paper on the NHS in 2010 had this to say about the future of NHS Trusts and Foundation Trusts (section 4.21):


As all NHS trusts become foundation trusts, staff will have an opportunity to transform their organisations into employee-led social enterprises that they themselves control, freeing them to use their front-line experience to structure services around what works best for patients. For many foundation trusts, a governance model involving staff, the public and patients works well but we recognise that this may not be the best model for all types of foundation trust, particularly smaller organisations such as those providing community services. We will consult on future requirements: we envisage that some foundation trusts will be led only by employees; others will have wider memberships. The benefits of this approach will be seen in high productivity, greater innovation, better care and greater job satisfaction. Foundation trusts will not be privatised.

The government clearly intended for most Foundation Trusts to be “employee-led social enterprises” in other words, no longer state owned, but instead, become not-for-profit private businesses. The statement at the end that “Foundation trusts will not be privatised” is contradictory since if a state-owned organisation is taken out of state ownership and into private ownership (as social enterprises are) then this is privatisation. Although the clause mentions "social enterprises" the same statements hold for mutuals. Mutuals are not state owned, they are in private (if mutual) ownership.

The government received 6,000 responses to the White Paper and summarised these responses in a paper called “Legislation Framework and Next Steps”. Section 6.16 in this document comments on the plan to turn hospitals into “social enterprises”:


Regulating healthcare providers discussed the prospect of enabling FTs to have employee-only memberships. Not many respondents commented on this proposal but, with some exceptions, those that did were generally not supportive. The CQC said that staff-only models without patient and public involvement could be at odds with public accountability and should be avoided, while the BMA thought they would do nothing to improve patient care. The Government has considered these concerns and concluded that staff-only membership would not be compatible with the foundation trust model.

The comments from CQC and the BMA are relevant not only for the government’s then plans for NHS hospitals, but also for social enterprises in general: there is no public accountability and the model does not necessarily result in better care. The final comment appeared to dismiss all possibilities of Foundation Trusts being taken out of public ownership. The policy was killed off.

A few weeks ago George Osborne made a curious and worrying announcement reported in the Daily Telegraph.


Ministers are drawing up radical measures, to be announced in George Osborne’s Autumn Statement, which will see widespread privatisations and at least one million public sector workers removed from the government payroll by the end of the decade.

The Telegraph, slathering in its small-state dotage, misinterpreted what this statement meant, they thought the government would simply sack public sector workers:


Ministers have been told that the government workforce will fall by about one million between 2011 and 2019. At a rate of 36,000 per quarter, this is the equivalent of sacking one state employee every four minutes, every day, for the next five years.

According to ONS there are 5.4 million people employed in the public sector (or 17.7% of the workforce). We have to be careful about what this figure means, because since 2008 it has included the workforce of the banks that were nationalised. These banks are only temporarily in public ownership, and anyway, they can hardly be regarded as providing a social good, in contrast to the NHS and education. Regardless of this issue, a cut of one million would be a fifth of all public sector workers. ONS provides a breakdown of this figure: 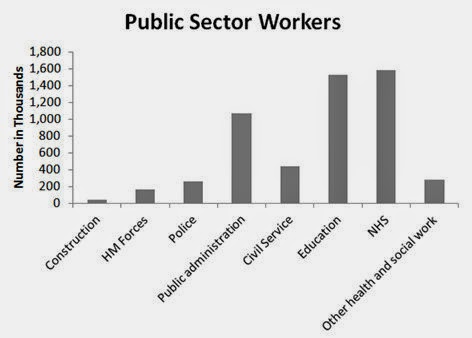 In March 2014 there are 1.6m people in the NHS, 1.5m in education and 1.1m in public administration (councils). Removing a million people from these figures will be ambitious and the resulting rise of unemployment figures would be catastrophic for any government.  The plan is clearly not to sack public sector employees, so what is Osborne planning?

If we go back to the first quote from the Telegraph there is a huge clue about what Osborne intends:

There is another issue to consider. The following graph is from Duncan Weldon, the Economics Editor of Newsnight:

(I have shifted the axes a little – specifically, the y axis starts at 10% not 0% in the original – so that the graph takes less space.) Duncan makes no comment other than the graph is interesting and he wondered “if the lines will eventually cross?”. The graph shows that the public sector workforce has reduced consistently since Q3 2009 and self employment has increased since at least Q4 2002. There is some connection between the two lines. The Coalition have cut the number of NHS managers since 2010, but it has appeared that many of those manager have been re-employed as self-employed “consultants”! The effect of the government's "sacking" of NHS managers was essentially to privatise them, turning a public sector employee into a private sector, cab-for-hire, "consultant".

The idea to turn NHS trusts into mutuals or “social enterprises” is a “policy zombie”: once you've killed it off it comes back to life a few years later. HSJ are now reporting that the Kings Fund are advising the Department of Health to re-introduce this idea.


Professor Ham says there should be an “option… for NHS trusts to become staff-led mutual… including trusts providing acute services”. He says another approach could see “emerging models of integrated care choosing to become mutuals where several organisations come together to create a joint venture to deliver services such as urgent care and care for older people”. The report says this should be voluntary for trusts. The DH has welcomed the report but HSJ understands it does not plan to respond by allowing NHS acute trusts to become mutuals.

This plan appears not to be just the fantasy of Prof Ham, since HSJ reports


the DH is expected to identify around 10 organisations, including acute providers, to pilot greater engagement of staff. There will be £1m funding available for the initiative, jointly from the Cabinet Office and DH. The programme will begin this summer and last until spring next year. It is understood the DH will use the work to identify regulatory, legal and practical steps it could take to allow new ownership and governance models such as mutual in the future.

Notice the phrase "practical steps it could take to allow new ownership". If you change the ownership of an organisation owned by the nation then this is privatisation.

The big sell off of the NHS will begin after the next election. Labour were keen on "public sector mutuals" in the last government and started the privatisation of Community Health Services into so-called "social enterprises". This process was halted when the current government tried to privatise Community Health Services in Gloucestershire and the plan was halted after a judicial review. The big question is, will Labour support the public sector and kill off Ham's zombie fantasy?
at 11:05