The Tories, in a shameless attempt to gerrymander, said in their manifesto that they would reduce the number of MPs by 10%. At the 2005 election there were 646 constituencies and at the 2010 election there were 650 (more about that later), so a 10% cut would be a new Parliament of 585 MPs. Nick Clegg has decided on a figure of 600 (8%), which is at least a round number. I suspect that this is still more than coukld fit in the chamber, but then few of them bother attending debates, do they? It seems to me that the most sensible figure is to count how many seats there are in the chamber and have just that many MPs, but there is nothing sensible in Cleggy's plans. So where does the 10% come from. In truth, no one in the Conservative party will admit to saying where they got it from. Indeed, in 2004 Michael Howard said that the number of MPs should be cut by 20% to 525.

The issue that is highlighted by the more rabid Tories is that the average Labour MP is elected by fewer votes than the average Tory MP. This partly due to the habit of inner city constituencies voting for Labour MPs and that there has been a move in the last few decades from the inner cities to the suburbs. But this argument is specious at best. Have a look at this paper that examines electoral bias up to 1997. The following graph shows the bias in the system for the various political parties in terms of the number of votes per seat. Clearly in 1997 Labour had a distinct advantage, but in 1983 and 1987 the Conservatives had an advantage, In short, there is always some advantage in the system for one party or another, but you would not realise this if you listen to the rabid Tories who claim that Labour always has the advantage. 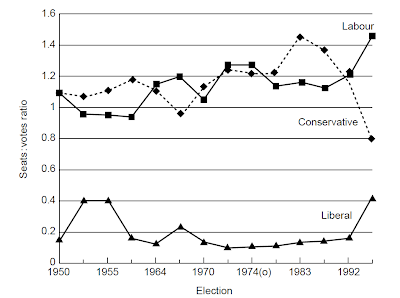 The Boundaries Commission for England is independent and has the responsibility to make constituencies equal. The problem is that this is a very lengthy process. For a start, people expect there to be some correlation between their Westminster constituency and their District of County council wards, so the Commission has to take this into account. To try and prevent gerrymandering the Commission performs extensive public consultation. Cameron's claim that he will make the constituencies "fair" by making them the same size is a nonsense claim, because this is what the Boundary Commission does anyway.

At the last election the Boundary Commission created 4 new seats. They also redrew the boundaries of the other 646 seats to make them more equal. You can download their results from here. The interesting figures are:

The standard deviation gives the spread of values and it is usually regarded that 95% of values will be +/- two standard deviations from the mean. In this case it means that 95% of all constituencies will be between 60,000 and 83,000. It is interetsing that the smallest is 33% less than the mean, but the largest is 54% more than the mean. In fact Isle of Wight is an anomaly, but it does skew the results.

The skill of the Boundary Commission will be to create constituencies where the standard deviation is as low as possible. However, as I have mentioned above, this "rebalancing" will be out of date before the following election because people move and people are born (or die).