I have taken the data from the Department of Health for the current Clinical Commissioning Groups. The relevant figures are:

I have plotted out the numbers of PCTs and CCGs in various population bands: 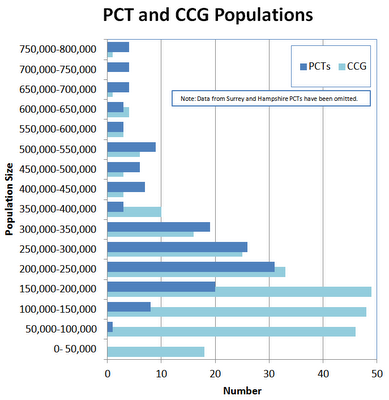 The PCTs are in dark blue and the CCGs are in light blue. It is immediately obvious that the centre of gravity of the graph of the CCGs is much lower than for PCTs: the clinical commissioning groups are much smaller than PCTs. More concerning is that out of 266 CCGs four fifths of them (219) have populations less than 300k. (For comparison 87, or 57% of PCTs were under 300k.) Three hundred thousand is the figure given by Civitas as the rough rule of thumb for the minimum size for a commissioning group to be financially viable:

With so many small CCGs is GP commissioning designed to fail?
at 22:29