The government keeps telling us that they will deliver real terms increases in the NHS budget, but the evidence proves otherwise. Today The Independent says that

The House of Commons library standard mote gives tables of NHS funding from when the service was created. Table 2 gives the expenditure on the NHS in England in 2010/11 prices (ie real terms) from 1974/75 to 2014/15. The last five years are the planned expenditure by the current government.The following graph shows the data plotted. 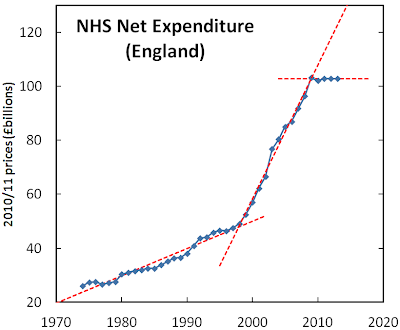 I have published a graph like this before, this new one is updated to show the new figures in the standard note (effectively, the dip seen for 2010-11). I have fitted three lines to this data, one for the Thatcher/Major years, one for Blair/Brown and the final one for the Cameron era. It is very clear that the current government is squeezing the NHS.

In the following graph I have plotted the data from 2006 with the Blair/Brown trend line plotted in blue and the Thatcher/Major trend in red. Clearly Cameron's funding is less than if the Blair/Brown spending had continued at the same rate, but what is striking is how Cameron's spending compares with Thatcher/Major. If the NHS were funded by Conservatives from the 80s we would have real terms increases of about £1bn every year, instead there is flat funding. 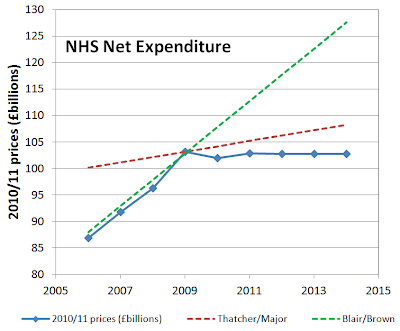