This is an interesting presentation (pdf) by Circle aimed at their investors. I want to show two graphs from this presentation. 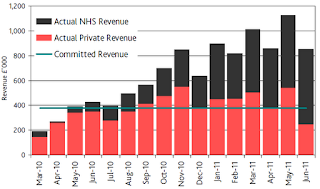 The first one shows vividly how the NHS is subsidising the debt ridden Circle Holdings. The red bars are the private patients and their figures are generally declining over the year. The black bars are the NHS patients and payment for these consistently provides much more income than the income from private patients. Without the NHS patients Circle would go bust; without Circle, the NHS would continue quite happily. Who needs who? 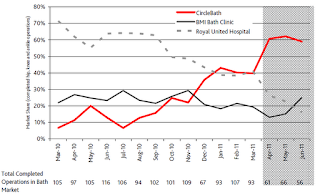 This second graph shows the "market share" between three hospitals in the Bath area, two private hospitals (including CircleBath) and the local NHS provider, the Royal United Hospital. The market share of the BMI hospital is broadly flat, and the small; peaks and troughs more or less correspond to the red bars on the previous graph (ie where the red bars are smaller and CircleBath have fewer private patients, there's an increase in BMI private patients). The interesting line is the decline of the market share of RUH which matches the rise of CircleBath.

How is CircleBath doing this? Well, it is not by being efficient and making a profit. Quite the opposite, they appear to be using their boutique hospital as a loss leader. The hospital had a revenue of £12.2m in 2011 (that is, the income of the hospital). Circle Holdings overall has a turnover of £75m on which it makes a loss of £14m. Circle's other hospital (in 2011) was the ISTC (Independent Sector Treatment Centre) at Nottingham which had a turnover of £51m on which it maked a profit of £2.4m. (Circle ran another clinic in Burton for the first 7 months of 2011, but this was a small unit, with an income of £1.5m). Considering Circle makes a profit at Nottingham on NHS work and it makes a loss over all, it is clear that the company makes a huge loss at CircleBath. Circle cannot make a profit from its private work, and any profits it makes from NHS work go to alleviate the losses they make from treating private patients.

The NHS "competitor" is RUH. This has an annual income of £216m, but the trust has a historic debt of £40m. The trust have been in surplus since 2007, and paying off this debt, and the current surplus is £4.2m. The trust has a loan from the Department of Health of £38m payable over 20 years, and like many of these loans it is at an eye popping rate of 5.05%. The government keeps boasting that they can borrow at historically low interest rates, so why are they lending this money at loanshark rates to NHS Trusts?

Clearly the situation in Bath is far from ideal. Circle are running a hospital at a loss poaching patients from the local NHS hospital. If CircleBath was an NHS hospital it would have been put into administration by now. Instead, it is allowed to threaten the viability of the local NHS trust by poaching patients and treating them for NHS rates that are less than they need to sustain the hospital.
at 22:47