Today, the Nuffield Trust have published a report about NHS funding carried out by the IFS (pdf).

The IFS say that:

This is a silly statement because it is a wide date range, with some widely different government policies and it makes no sense to give an average. They may as well tell us that the average person has just under two legs, it has just as much meaning. Also, an average increase of 4% a year is a geometric increase (ie non-linear, the gradiet of the graph is not constant) whereas the actual data shows that the increases were broadly linear with three general trends.

I have mentioned before, these three trends:


For my analysis I only had data (for England) from 1974, the IFS show data (for the UK) from 1949 to present. This data shows that the £1bn/yr real terms increase started at about 1960. I have copied their graph (Figure 1) and coloured it to show the government in power (blue is Conservative, red is Labour): 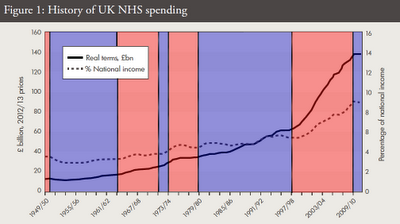 The Wilson/Callaghan Labour government suffered from the oil crisis and IFS imposed austerity, but it still increased NHS funding overall. The Thatcher/Major period also increased NHS funding. The Cameron period is clearly a new shift, and the IFS is suggesting that a Cameron government after 2015 may provide increases somewhere between flat funding and Thatcher levels of real terms increases.
at 12:43