You would think that a tweet is pretty easy to report - there are less than 140 characters, so the easiest way to report it is to give the tweet and allow readers to make up their own mind. The BBC apparently found this a bit hard to do. For the record, here is that tweet: 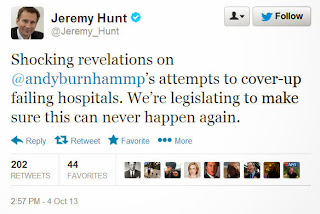 This is pretty unequivocal - Hunt is accusing Burnham of attempting a cover up. This is how the BBC reported it on the 6 October:

Although this article did not provide a copy of the tweet, it did report it accurately: Hunt suggested that Burnham attempted a "cover up". However, the following day, the BBC changes its tune. On the 7 October, the BBC changes "suggested" (which is assertive) to "appeared" (which suggests doubt): 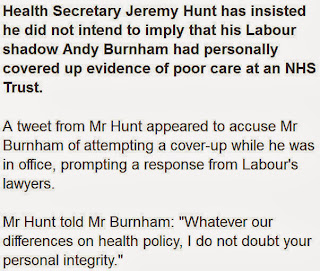 There is no doubt: Hunt was suggesting that Burnham had "attempted a cover-up".

Here, they are "reporting" what the Tory MP Steve Barclay is claiming, but the BBC have not looked at the evidence themselves, otherwise they would have dismissed Barclay's claims as being fabricated.

Burnham, provided the emails himself in a blog on Labour List. I urge you to read the email yourselves, but the most relevant part is paragraphs 10 and 11:

This email was from Jill Finney to Jamie Rentoul. In it Ms Finney says Burnham was "furious" that the CQC press office had not released the information about Basildon & Thurrock according to accepted rules, and rather than "putting pressure" on CQC to "water down its concerns" Burnham ordered a joint press release between the two regulators CQC and Monitor. Clearly the accusation by Barclay is fabricated, yet the BBC report it as if it is true.

Now the Department of Health says that Burnham should have been consulted before the emails were released to Barclay:


the Permanent Secretary at the Department of Health, Una O'Brien, has written to him saying they should have consulted him before releasing the emails. "I am sorry that on this occasion, the protocol was not properly observed and I apologise both on behalf of the Department and the CQC for this lapse." She goes on to say: "My investigations have revealed that this was a genuine oversight on the part of officials but nonetheless unacceptable."