Just got back from 2 hour circular walk. We walked along the footpath on the left of the map, above, going along the railway and intending to join the footpath (the diamonds) at Castle Meadow Bridge along the Grand Union Canal. It clearly looks like the two footpaths cross, but unfortunately the footpath does not just cross the towpath, it crosses over the towpath.

When we got to the bridge, there was clearly a path to the canal but there was a locked gate and fence preventing us from getting down from the footpath to the towpath. So we retraced our steps a bit and then walked on to Tythe Barn Bridge to try and get down there.

The following is a photo taken after we had got down from the public footpath to the canal, looking up at the bridge which has the public footpath. As you can see, there are steps, but the route is blocked with a fence and a locked gate. 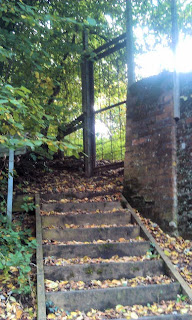 And just for the record, this photo shows the bridge from the top of the steps, showing the post indicating that it is a public footpath: 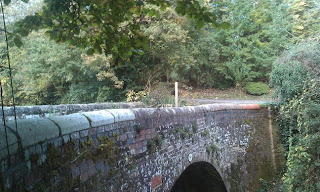 The likelihood is that the land owner blocked the access, although why they would do that is unclear.

There are two rights of way here, and two authorities involved. The footpath, the green dashed line, is a public right of way. In England many such footpaths have been rights of way for centuries. The footpath goes across private land (in this case a plantation of poplars and firs). The law gives walkers right of access across the land, but the footpath is owned by the land owner. The local county council have a responsibility to maintain a list of the footpath routes and usually local walking groups ensure that the signs and items like stiles and gates are maintained.

The canal towpath, the green diamonds on the map, is a recreational route with the agreement of the land owner, in this case, the Canal and River Trust. Canals were formerly state-owned by British Waterways, but in part of its privatisation plan (which can be subtitled "we don't own or do anything") the Coalition government first tried to turn British Waterways into a mutual, and then decided it should be a charity. There is nothing in either the Conservative, or the Lib Dem 2010 election manifestos about taking the canals out of public ownership to mutalise them or give them to a charity, but that is typical of this undemocratic government.

Two types of footpaths, yet no integration of the two because the land owner of the footpath (as is their right, it is their land) has blocked access. Of course, we found a way down, climbing over a fence a little further along the canal. We were halfway round the circular walk, so if we hadn't had access to the canal we would have had to retrace our steps along the footpath, and since the canal looked like a pleasant (and less muddy) walk we decided it was worth climbing over a fence. Anyway, I had planned the walk from the map, making sure we were walking along rights of way, and I was annoyed that my plan was wrong because of the inflexibility of a land owner.

NHS and social care integration will be far more complicated. Not only are there two public sector organisations commissioning the work (CCGs and local authority social services), there are a myriad of provider organisations, some public sector (hospitals) and some private sector (nursing homes). The possibility of one or more of these organisations deciding not to be flexible is high, and the result will be poor care for patients.
at 19:22