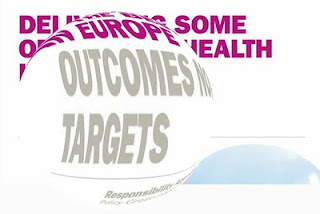 
The Conservatives are on potentially shaky ground here. They know that metrics are important since how can you improve quality if you do not make measurements, and pledge to improve performance? It was the Conservatives who introduced SATs tests and school league tables; SATs, of course, define a level of achievement that every child should obtain, and this is a target. Targets are ingrained in Conservative thinking (some people may wryly remark that is why Tony Blair was so keen on them). The problem is that some targets have got a bad press and Cameron's focus groups have flagged up targets as a potential subject for them to use to attack Labour. The Conservatives have attacked targets with gusto, claiming that they are politically driven.

But if the Conservatives remove targets how can they monitor quality in the NHS and how can they ensure year-on-year improvements? The answer is simple, you just need to rename targets and tell people that they are something new: outcomes. Simples!

"waiting times and other measures of service and patient satisfaction will still be collected, but instead of servicing government bureaucracy and paperwork, they will be made publicly available to patients, so the incentive for achieving low waiting times will be stronger"

The language is suggestive, you are made to think that the metrics for targets have nothing to do with patients, they are merely for the pleasure of bureaucrats and paper pushers. To someone waiting for an operation the guarantee that the waiting list will be no more than 18 weeks is far more important to them than simply "servicing government bureaucracy and paperwork".

This is a nonsense policy. For a start, you have a choice of provider already, but most people want to go to their local hospital: they want their local hospital to be high quality; they do not want to shop around. But this is what Cameron is promising us: GoCompare or SearchTheMarkets for hospitals. Guess who had a career in marketing?

In one place in the document the Conservative policy writers even give an example saying that if a hospital under performs:

"Patients and professionals move away from lower quality provision, incentivising low performers to improve and take on best practice"

(Ugh, there is that horrible American word, used frequently in US business circles, incentivising. This clearly shows the pedigree of these policies. Please Mr Cameron change it to to provide an incentive for.)

The problem with this statement is that it does not address the issue. If there is a quality issue with a provider then the cause could be the ability of the staff, or the level of funding, and there is no indication in this statement how achieving poor results could change the situation. Their only explanation appears to be:

"With process targets abolished and patients exercising greater choice based on information about results, a whole new culture will emerge within the NHS."

So they expect that there will be a new "culture"? We will see a bit more about culture in a moment.

The Conservatives say that they will make providers measure outcomes and not targets. So what is an outcome?

"The technical definition of an "NHS outcome" is the recorded result from the care that a patient, or a group of patients, experiences, for example long term survival rates from cancer."

So what are these, outcomes that the Conservatives wish to be achieved?

All of these are laudable, but can you, hand-on-heart, say that these are not targets? Of course they are! Not only are they targets, but there is a milestone for most of them, either a date that the target has to be achieved, or there is the demand that there are year-on-year improvements.

Some of these statements say that the Conservatives want us to compare our outcomes with those in other countries. Again, this already happens, but let us see what the policy document says about this:

"publishing those results, so we can see where we are making progress relative to other countries and where we lag behind, and can ensure continuing improvement in results;"

So who will measure the outcomes?

"The quality of outcome measures – and therefore of the decisions about future treatments and resource allocation taken on the basis of those measures – are dependent on the accuracy of the data provided by clinicians. The best person to report on a treatment episode is the clinician responsible for the care."

The new payment system that the Conservatives plan to introduce (I will call it payment for outcomes so that it is not confused with the current payment system used in the NHS: payment by results) will not pay a provider for the actual work done, but only for the outcome of the work. The Conservatives say that the best person to measure this outcome is the "clinician responsible for the care" so isn't there an incentive for this clinician to say that the procedure was successful? A less than successful outcome means not only less payment for the provider, but it also means more treatment for the patient to remedy the treatment that was not successful. There is even a possibility that patients could receive less treatment than they need due to optimistic measurement of outcomes. This is the culture that was mentioned above and it is a culture that we do not need.

However, David Cameron (in a speech to mark the sixtieth anniversary of the NHS at Trafford General Hospital, on the 2 January 2008) said that this is the culture that he wants:

"It should be a basic rule of social policy that you don't pay for what you don't want more of. Money should attend success, not failure. So, for instance, I don't think hospitals should be paid – or paid in full – for a treatment which leaves the patient with a hospital-acquired infection like MRSA. … GPs can spend the money that they save in this way to improve care elsewhere."

If there is a problem with hospital acquired infections then this means that the provider needs more investment to tackle infections and not a cut in funding. Curiously soon after quoting David Cameron's speech the green paper says:

"The tariff regime, where providers are only paid for the procedures they deliver, will reward success and encourage under-performing providers to improve."

The "tariff regime" is more accurately called Payments by Results and is the current system used to pay NHS providers. But note the phrase "are only paid for the procedures they deliver", this does not say that the provider will be paid according to outcomes. This clearly contradicts what David Cameron said.

Finally, note that the Conservatives regard targets to be bad because they are political, but the green paper says:

So no "politically-motivated process targets" then?

It is clear, the Conservatives will still have a target driven culture in the NHS, but now the targets will be called outcomes and if hospitals do not achieve expected outcomes from a treatment on a patient then the hospital's funding will be cut. Can anyone explain how this fits in with David Cameron's oft quoted "ring fence". And how can these cuts to hospital funding be reconciled with his pledge that he will "cut the deficit, not the NHS"
at 23:34