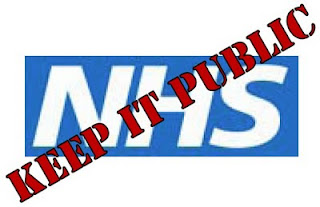 The Conservatives policy is to replace "targets" with "outcomes", their Policy Green Paper No 6 explains the rationale behind this policy. This is the final part of my analysis.


Sadly, no article including the words Conservative and NHS can avoid the word privatisation. Let's start with what appears to be the default phrase from David Cameron's Conservatives:

"introducing payment-by-results within the system, to reward those doctors and hospitals that achieve good results and to incentivise improvement amongst those whose standards are falling behind."

Don't you just hate that horrible American word incentivise? It just goes to show where the Conservative thinking comes from.

The payments by results system already exists, it is the name of the scheme that pays hospitals for each procedure that they perform. The Conservative policy writers should know this, and using this name for their policy either means that their policy writers do not know how the NHS currently pays hospitals or it is a deliberate attempt to mislead. The current system is to pay an NHS provider for each procedure they perform. Each procedure costs money and the NHS provider needs to cover that cost, so the Primary Care Trust of the patient pays the provider for the service. The Conservative policy is radically different because the provider will be paid only if the procedure is deemed to have a successful outcome. This has a myriad of problems, not least because medicine is complicated and a patient could have health problems unrelated to the condition being treated which could affect the outcome.

The results of the Conservative payment policy will be to promote the private sector. Any healthcare provider will not want to perform a procedure where they are not guaranteed payment. There are some procedures which have very high success rates and private providers will target this market, taking funding away from NHS providers. David Cameron will skew the market to make private suppliers more likely to be used through the politically appointed (but unaccountable) super-quango, the NHS Board who will determine commissioning policy (ie, which providers are allowed to deliver the care). The NHS Board will be mandated to increase the amount of work performed by private providers, but paid out of NHS funds. The result is that NHS providers will find that the more successful (and potentially profitable) procedures will be performed only by private providers under a Cameron government.

It is worth pointing out that one underlying theme of this document is the phrase "already used by healthcare organisations like BUPA". It is always a good idea to learn how other organisations perform their work, and it is important to learn from them. But the underlying theme in this green paper is that according to the Conservative policy writers private healthcare providers are the gold standard for healthcare in this country. There are two points to make: first, they are not the gold standard, and second, if a Conservative government will base payments according to the way that private healthcare providers work, doesn't this mean that they will have an unfair advantage in the "health market" that the Conservatives plan?