Just for those interested, here is a plot of PCT sizes and GP "pathfinder" consortia sizes: 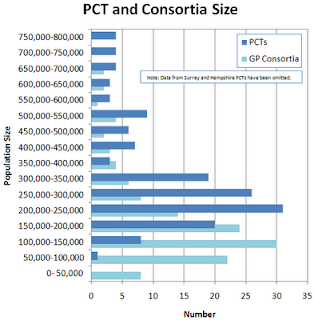 The data I have used here are from ONS and the Department of Health.

The most noticeable feature of this graph is that the pathfinder consortia tend to be much smaller than PCTs. The median size for GP Consortia (light blue) is 157,000 whereas for PCTs (dark blue) the median is 282,000.


The government's Impact Assessments that accompany the Bill (section A64) states:


Overall, the future costs are dependent on a number of factors, particularly the number and size of GP Consortia, on which the Department is not being prescriptive. Ultimately, the extent to which GP Consortia can and will join together to perform functions will be the determinant of future costs. Preliminary analysis suggests that if GP Consortia are established with an average size of 100,000 population, in a similar form to PCTs and without any sharing of resources to deliver some functions, then some functions may incur additional costs. This could mean that the savings of £1.3bn a year from reduced administration costs may be partially offset by up to £475 million.

This suggests that size does matter, and the smaller consortia will not be able to commission services as efficiently as the larger consortia. The government is committed to an arbitrary cut by one third in commissioning costs and so this will put immense pressures upon GP commissioners.

In response to the NHS white paper the BMA held a half day event to consider the issues surrounding GP commissioning. The consensus from this event gave a figure on the minimum size for consortia:


The majority of delegates felt that anything smaller than a population of around 500,000 may face difficulties and carry too much risk, while it would not be able to take advantage of the necessary economies of scale to ensure that commissioning was efficient. There was also recognition that commissioning groups would need to be of sufficient size for credible interaction with acute trusts and local authorities. ... It was suggested that within commissioning groups covering 500,000 or more patients, locality arrangements could be put in place to facilitate local engagement and the development of locally relevant patient pathways. Where consortia are smaller than this, it is likely that they would need to collaborate with their neighbours and where appropriate form larger federations.

A study by Civitas says:

None of these suggest that the median pathfinder size of 157,000 is optimal. The smaller consortia will have three options:
While it is true that no consortium will be forced to use private sector commissioners, the drive to save one third of commissioning costs (compared to PCTs) and the economies of scale means that the smaller consortia (from the graph above, that means most consortia) will need to either cluster or buy private sector commissioning.
at 16:02