The privatisation of the provision of NHS services is happening right now. The government is pushing a policy of "Any Willing Provider" and is justifying this as "patient choice". It is not since inevitably your "choice" will be from the provider who have been commissioned to provide the care. As a patient you will not be told automatically what is an NHS provider and what isn't (sometimes the names can be confusing), and if the commissioner only offers private providers you may not even be given the choice of an NHS provider. The choice, as always, is with the commissioners.

The NHS Co-operation [sic] and Competitions Panel have released a report today about the implementation of "Any Willing Provider" (AWP) in England. They make the point that AWP is not a policy of the Health and Social Care Bill going through parliament at the moment, since the previous Labour government legislated to allow AWP and so it is up to the Secretary of State to decide the extent of this policy. The current Secretary of State, Andrew Lansley, wants private providers used everywhere.

On Monday, David Cameron made it abundantly clear that this meant privatising NHS services:


"We will create a new presumption – backed up by new rights for public service users and a new system of independent adjudication – that public services should be open to a range of providers competing to offer a better service."

Note that there is no mention of "patient choice", patients cannot choose to have a public provider, instead David Cameron will allow private providers to choose what services are available for the patient, through this new "presumption" that they will be able to take over NHS services. (Don't forget Cameron's meeting in December 2009 with the far right Nurses For Reform who said "the state should not own or have any of its agents manage hospitals". A statement that seems prescient: Cameron is implementing this policy right now.)

Lansley says he wants AWP to become "the reality in the vast majority of NHS-funded services by no later than 2013/14", so this policy is being rolled out at breakneck speed. Of course, Labour started all of this "patient choice" nonsense (nonsense because the patients rarely ever chose) under a policy called the Extended Choice Network (ECN) and Free Choice Network (FCN). However, Burnham put breaks on the policy by making NHS hospitals the preferred provider (freezing out the private sector), but once he got his feet under the table at the Department of Health, Lansley started up the Blairite privatisation process, and wants it accelerated, to create what the Letwin calls a "health market".

"All regions (with perhaps only a few exceptions) now have a process underway for transitioning from national- to PCT-based contracts with independent sector providers of routine elective care. However, some PCTs and SHAs appear to have started the contracting process quite late, and in most cases PCTs and SHAs are looking to finalise new contracts with independent sector providers in the next few weeks."

This indicates that in the next few weeks GPs will be able to refer patients to a wider range of private providers. However, it turns out that some PCTs are dragging their feet on this:


"A significant number of PCTs (approximately 70) have been identified to us as engaging in conduct that raises issues of consistency with the Principles and Rules as well as, in some cases, the Choice of Provider Directions."


And further, there are problems creating the contracts with the private providers:


"It seems likely that few of the new PCT-based contracts with independent sector providers will be finalised before ECN/FCN arrangements come to an end on 31 March 2011. If this is the case, the scope for patient choice will be substantially reduced from 1 April 2011 given that independent sector providers account for around 175 of the approximately 475 acute care sites from which routine elective care is available to NHS patients.

"While this reduction in patient choice may only be temporary while new contracts are finalised, the damage to independent sector providers from this interruption may have a longer term effect on their ability and willingness to provide services to the NHS."

The stark reality of AWP is that if a private provider treats you that means less money for the corresponding NHS provider, and if this happens too often, with too many patients, the NHS provider will no longer be financially viable and close close. If that provider is your local NHS hospital, then it will mean that the service in the hospital that does not break even will close, but it could have a wider implication because NHS hospitals use the surplus generated from one service to subsidise services that generate deficits.

For example, at my local NHS hospital all services make a surplus except for two: paediatrics and A&E. The hospital provides those two services knowing that they will generate a deficit because the hospital knows that the community needs these services. If patients choose to have their hip or cataract operation at a private hospital, that will mean the surplus from performing that operation will not be available to subsidise the other services at the NHS hospital. Instead, that surplus will be a profit, and paid as a dividend to the shareholders of the private hospital. Literally, if you have you hip operation paid by the NHS at a private hospital, there will not be the money to treat sick kids.

The CCP are blatant about this:


"The underlying rationale of providing patients with the ability to choose between providers of routine elective care is that the need to attract patients (in order to earn revenue given the Payment by Results system of tariffs) ensures providers have an ongoing incentive to offer the highest quality care. Providers that are successful in attracting patients will be able to earn revenues that, in the case of NHS Foundation Trusts for example, can be reinvested in other services. Providers that do not attract sufficient patients face the prospect of being unable to meet their financial obligations."

Make no mistake about this. The last sentence means that if a service does not "attract sufficient patients" it will close. The AWP policy has nothing to do with improving NHS care, it is all about closing NHS hospitals.

The CCP give a graph showing how, over the last few years, the privatisation has progressed: 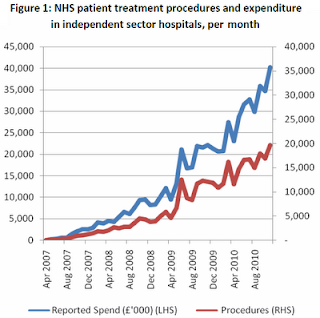 As you can see, the process is relentless, although the current figure of about £22m per month (about £260m a year) is quite tiny compared to the overall spend by the NHS on elective treatments. (However, I am not sure that these are the complete figures. In the OFT says that in 2008 the total value of the market for private healthcare in the UK was estimated at just over £5.5 billion, and 23% was from NHS-funded patients - £1.265m. There is a £1bn difference between these two figures.)

It is clear that AWPis here with us now, regardless of what happens to the Health and Social Care Bill. The question is how much the process will be accelerated, and what effect this will have on NHS hospitals.

The Conservatives are using the concept of "patient choice" to push through a policy that will inevitably lead to the privatisation of the NHS, bit-by-bit. So why not turn this policy n its head? If the intention is to close NHS service because too many patients choose private providers, we can close private providers by persuading patients to choose the NHS providers. If, in the future you need care paid for by the NHS, ask your GP to tell you which providers are NHS providers and do not allow your doctor to offer you the choice of a private provider. 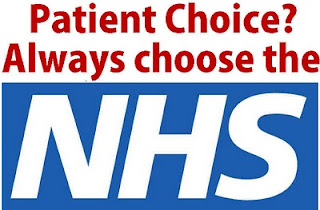