The Conservative party went into the 2010 election with the slogan "I'll cut the deficit, not the NHS". Labour knew that it was not possible to do the former without doing the latter, and because they didn't give a straight answer about how they would change NHS funding, they lost their traditional NHS electoral advantage. The Conservatives had a clear message: "year-on-year, real terms increases", and although they (have almost) delivered on this, it is not what the public expected.

The House of Commons Library Standard Note SN/SG/724 gives tables of NHS spending from when the service was created. In this document Table 2 gives the expenditure on the NHS in England in 2009/10 prices (ie adjusted for inflation, these are "real terms" prices) from 1974/75 to 2014/15, the last five years are the planned expenditure by the current government.The following graph shows the data plotted. 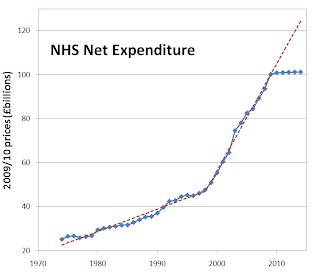 The actual data is plotted in blue. I have also fitted two trends to this data (the red dashed line). Although there is some variation, it is clear that from 1974 to 1998 there is a year-on-year increase (in real terms, around £1bn each year). Then we had the 1997 election with a pledge from the Labour party to increase NHS spending up to the European average in terms of percentage of GDP. This is can be seen on the graph, the gradient of the line increases significantly between 1998 and 2010. The graph indicates that in real terms there has been an increase of approximately £4.8bn every year.

After 2010 the projected spending is flat. The actual figures show a small increase, but this increase is so small that it could easily be turned into a real terms cut if inflation increases.

Technically the government has met the pledge of a "year-on-year real terms increase". Since the amount of money going into the NHS will not decrease this means that NHS funding has not been "cut". However, this is not what the public interprets when they think about a cut in funding. To the public a cut is when the NHS is receiving less money than it needs.

This graph shows three approaches to the NHS funding.

The first is the Thatcher/Major approach that is roughly a £1bn real terms increase every year. We know from experience that this lead to long waiting times, poorly maintained hospitals and demoralised staff. The NHS was clearly not being funded appropriately, it was not receiving the funding it needed, even though there were a real terms increases.

The second is the Blair/Brown approach that is roughly a £4.8bn real terms increase every year. We know from experience that this lead to short waiting lists, new hospitals and well paid and well trained staff. 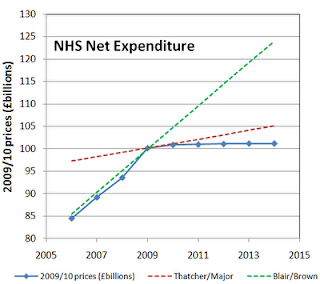 The difference between the green dashed line (Blair/Brown) and the blue line is the cut that the public will bear. The graph shows that if Cameron had taken the Thatcher/Major approach he would give more money to the NHS, and we know from experience that the NHS would suffer. (To those people who will inevitably claim that the NHS was over-funded during the Blair/Brown years, tell me why you think that the Thatcher/Major approach is also too generous for Cameron.)

The fact that the NHS will get "increases" that make Thatcher/Major look generous means that the NHS is heading for a financial crisis.
at 13:55