If patients behaved as consumers there would be no such thing as distinct "hospital catchment areas" because a patient would treat all hospitals in England as a candidate for their choice and consequently each hospital would have a "catchment area" of England. However, we know that patients do not want choice: they just want to use their local hospital. The most rabid governmental promoters of competition, the Cooperation [sic] and Competition Panel, say "on average patients travel around 12km to their chosen provider", the "chosen provider" is quite clearly a local provider. So hospital catchment areas are important.

Health Service Journal and the Financial Times have recently come out with lists of hospital trusts at financial risk. HSJ came up with a list of 22 trusts where their PFI payments are so large that they are unlikely to be able to meet the financial criteria required to be authorised as a Foundation Trust. The Financial Times list 17 trusts where their level of historical debt (which includes PFI) threaten their ability to be authorised as Foundation Trusts. There is some overlap between the two.


In the original Bill the government said that if a trust is not a Foundation Trust by April 2014 it would cease to exist (meaning, it would have to merge with an existing FT, or close). Such a pronouncement was simply bonkers: there just wasn't enough time to change the finances of trusts with extremely large debts. Lansley stuck to the ludicrous deadline until the Future Forum made it clear how daft this deadline is. The deadline has now been moved to April 2016 and there is talk of it being pushed further into the future.

Politically it was bonkers too because a deadline of April 2014 would have meant that the government would go into the next election under the shadow of closing hospitals. Voters like hospitals and it is a brave politician that says that an NHS hospital must close. So there is an important political aspect too. Last December I pointed out that Labour and Liberal Democrat areas have a higher number of Foundation Trusts than Conservative areas. Foundation Trusts in general are the hospital trusts with better finances, so my limited analysis from last year showed that Conservative and Liberal Democrat MPs would be more at risk than Labour MPs seeking re-election.

Since last December I have been working on this political aspect, but it is not easy. One way to look at the issue is to look at the constituency where the trust is located. However, since the average constituency size is about 70k and even a small district general hospital will cover a population of several hundred thousand, it is clear that more than one constituency will be affected by the financial issues at a single trust. There is also the fact that in urban areas the catchment of hospitals overlap, so in the overlapping areas (where patients have two or more hospitals that they can regard as "local") the poor finances of one hospital will have a lesser effect. Clearly, any analysis means taking into account several constituencies around the trust and making estimates to "weight" the effect of poor finances.

Even so, in June I created the following spreadsheet to try and analyse the political effect of hospital finances. This is an extract because I collated more information but I could not come up with a good conclusion from the data. If you take a figure of around 5% as a "marginal" then the figures (for the combined HSJ-22 and FT-17 list) show that three Labour marginals and five Conservative marginals are affected. If we assume the campaigning in these marginals will target the Coalition (and increase the Labour vote) then these hospital trusts will only affect five seats, and of these only two are where Labour came second (and could take the seat). I rejected this analysis because it is far too simplistic to assume that only one seat would be affected by the local trust's finances.

Over the last few months I have tried to get an idea of the catchment areas of trusts. It is not an easy thing to do. Some trusts list in their annual reports the populations they cover; some trusts list this in their descriptions on the NHS Choices and some list it in their descriptions on the Dr Foster Intelligence website. The problem is that not all trusts do this, so if you use data from these sources you have to do some guess work.

A better way to determine the catchment area is to look at the home addresses of the patients who use a hospital. Such information is collated by the Hospital Episode Statistics Online website. Home addresses are personal and it would not be ethical for this information to be made public. However, it is possible to convert a postcode into a local authority election ward and since each ward is about 10k - 15k such data will not have patient identification values but can still be used to determine catchment areas. Unfortunately HES Online do not provide this data by default, but can provide it on request (for a fee).

This is what the South West Public Health Observatory have done. They have analysed HES data which includes the home address of the patient and produced a series of maps with electoral wards colour coded according to the number of patients who use the hospital. Take for example North Bristol NHS Trust. This is on both the HSJ-22 and FT-17 lists. The SWPHO gives the following map for the catchment area (I have provided an extract to conserve space). 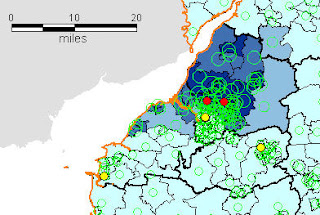 The darker the blue shading, the more patients use the trust (the circles also indicate the number of patients). If we ignore the cyan areas (since some patients choose to go to other hospitals in these areas) and concentrate on the three shades of blue, we can see that patients come from seven 2010 constituencies and partially from another constituency. These constituencies are:

If we use the simplistic analysis of looking at the constituency where the trust is located then only Bristol North West would be at risk. However, widening out the analysis to include neighbouring constituencies where many patients live, the figures show that if there is a backlash against the Coalition parties due to the situation at North Bristol NHS Trust then at least two Conservative seats (Bristol North West and Kingswood) would be affected.

Saddly, other Public Health Observatories have not carried out the same analysis (or if they have, they do not make it publicly available). So to do a complete analysis of the effects of the HSJ-22 and FT-17 work will need to be done using HES data to map the catchment areas of these trusts.

MHP is a consultancy agency that have recently got some publicity over an article they wrote about the political aspect of the financial situation of trusts using the new constituency boundaries. Unfortunately they have rather lazily taken the approach of looking at the constituencies where the trusts are locate (an approach which I rejected - see above). Their "analysis" that caused a bit of a stir amongst the health policy twitterati says


"New research reveals that 21 struggling NHS trusts will be located in marginal constituencies at the next election following a review of constituency boundaries. Of these, 12 are located in ‘super-marginals’ with a notional majority of less than 1,000 after proposed boundary changes come into effect."

I think that this seriously under-estimates the effect of the finances of these trusts: using the constituency where the trust's registered address is located is a poor method.

So why haven't I done a more complete analysis? Money. Currently I am unemployed and I cannot afford to pay for the data. A tailor made dataset from HES Online that lists the patients using a hospital broken down into the wards where they live will cost between £348 and £773. I do not have that sort of money to spend. Also, the analysis will take time and if I get offered a job I will stop that work immediately. If someone is willing to pay me, say, a month's work (plus the expenses of getting the HES data) then I am willing and able to do the work.

I am surprised that MHP didn't do this work correctly, since their analysis shows that they really do not understand catchment areas of hospitals.
at 17:32