At Netroots today Clifford Singer posted a graphic showing the readership of newspapers who have left-leaning and right-leaning editorials. The graphic was meant to indicate that the majority of the UK media are right-wing. This lead Harry Cole to tweet "damn that free market eh?" which is a fair point because no one is forced to buy a newspaper.

After such a sensible tweet, Cole slipped back into his usual partisan mode by retweeting a less enlightening response from Frank Manning: "Hilarious: @PSbook reckon this slide shows right-wing bias in the media. Or, it could mean more people are right-wing." Well, no, it doesn't. People buy The Sun for the sports and celebrity gossip coverage not its political content. The politics comes "free" with the rest of the content. (The same can be said of the Mirror.) The bias aspect comes from the fact that we know how people vote, so we expect their views should be reflected in the political allegiance of the newspapers.

The sales of the National newspapers can be found at the National Readership Survey website. The following shows the readership of left/right/centre aligned newspapers, and the votes cast at the last election. 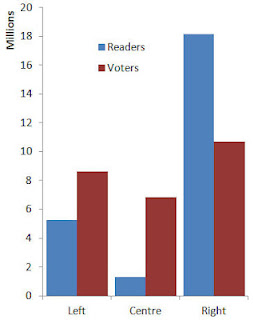 74% of the newspapers bought are right leaning, yet 40% of voters voted for right wing parties.
at 17:25