Would you invest in Circle?

So let's have a look at what the market - investors, the very people who predict the profitability of a business and use this to decide whether to invest - think about Circle. The following is the graph of the share price of Circle Holdings over the last 6 months. (Graph is from Interactive Investor.) There are two things to point out. First, Circle was floated on AIM last summer; second the jump in November was when it was finally declared that Circle would take over Hinchingbrooke (before then it was the "preferred provider" and there was six months of negotiation about what would be in the contract). 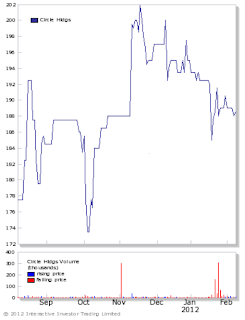 The graph shows that initially the market thought that the Hinchingbrooke deal was a good idea, but since then, there has been a consistent decline so that now the share price is at the same level it was before the Hinchingbrooke contract was signed. In other words, the market say that Hinchingbrooke will not make Circle a lot of money. It will be interesting to see how the price changes over the next six months as more details come out about how difficult it will be for Circle to run the hospital. Bear this in mind. Circle has nailed its colours to the mast on Hinchingbrooke. Its other ventures are small scale compared to this. If Hinchingbrooke turns out to be vastly more difficult to run than Parsa thinks (as is inevitably the case) the Circle share price will plummet.
at 10:23